Osteochondrosis of the spine is a degenerative-dystrophic lesion of the intervertebral discs, the vertebral body, the ligamentous apparatus, in which the bone and cartilage tissue of the cervical, thoracic and lumbar spine is destroyed. 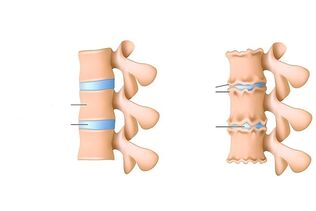 Pathology affects the entire motor segment of the spine, disc, both vertebral bodies, adjacent nerve and muscle structures. This disease is often called the "disease of civilization", which is associated with upright posture and stress on the spine every day.

The main cause of spinal osteochondrosis is microtrauma during physical exertion, unhealthy diet, a sedentary lifestyle and even a genetic predisposition. If this disease progresses, then the intervertebral disc and the structures adjacent to it suffer first. The central part of the disc changes, which leads to the loss of the shock-absorbing properties of the vertebra, as a result of which cracks and thinning are formed on the fibrous ring.

American statisticians say that the first reason for limiting the activity of people under 45 is pain in the dorsal and cervical spine. The majority of urban residents, drivers, who spend a significant part of their time in a sitting position, reloading the spine, are at risk.

Osteochondrosis is the cause of more than 70% of back pain cases. The risk of the disease increases with age.

Etiology and pathogenesis of spinal osteochondrosis

Spinal osteochondrosis has a long-term pathogenesis of development (from several months to decades). It depends on the factors affecting the development of the disease.

Osteochondrosis can be in a "dormant state" for a long time. Many patients learn about the disease in the presence of severe pain, when the dystrophic process in the cartilage tissue has already damaged the nerve roots.

There are such stages in the pathogenesis of spinal osteochondrosis:

As osteochondrosis develops, pathologies appear in the intervertebral discs and in the cartilage themselves, which subsequently overlap and can provoke the appearance of an intervertebral hernia.

Symptoms can be both general and specific, characteristic of pathological changes in cartilage, intervertebral discs, and adjacent tissues.

The very first sign of osteochondrosis should be called aching back pain, numbness of the vertebral sections, limited movement, increased pain during physical exertion.

One of the most common signs of cervical osteochondrosis is impaired blood circulation, which leads to frequent dizziness, fainting and headaches.

Symptoms of osteochondrosis in the lumbar spine are diverse. This part of the spine is loaded more than others.

At the first back pain, an examination should be carried out to determine the source of the pain. Osteochondrosis is a difficultly diagnosed disease, since pain can be caused by other pathologies not related to the spine. The patient will need consultations of several specialists: a neurologist, first of all, an orthopedist, a vertebrologist.

Methods for the diagnosis of osteochondrosis:

It is important to differentiate osteochondrosis of the spine in a number of other diseases with a similar clinical picture, for example: neoplasms on the spine of an oncological nature, violation of the integrity of cartilage tissue, inflammation, intermittent claudication, the formation of cysts on internal organs, urolithiasis, gastritis, pyelonephritis, stomach ulcer, angina pectoris, disorders of the nervous system. For this purpose, studies of the digestive system, nervous system, and blood circulation can be prescribed. The following diagnostic methods are used - cardiogram, ultrasound, electroencephalography, endoscopic examination (digestive organs).

Most often, the course of this disease is accompanied by neurological complications:

Treatment of osteochondrosis of the spine

The process of treating any type of osteochondrosis pursues one goal - to relieve pain, to prevent destruction and deformation of the tissues of the spine. Treatment can be conservative or surgical. The type and method of treatment is prescribed individually for each patient, based on the diagnosis (stage, type of disease, general well-being of the patient).

In the acute period of the pain syndrome, relaxation and rest are recommended, anti-inflammatory drugs (dicloberl, voltaren), injections of antispasmodic mixtures, vitamin B, preparations for rubbing - dip rileaf, larkspur, etc. , can be prescribed as the pain syndrome subsides. physical education and physiotherapy (diadynamic currents, electrophoresis, magnetotherapy).

There is also a surgical method of treatment, which is used in the presence of intervertebral hernias more than six months old, compression of the roots of the spinal cord due to a narrowing of the gap between the vertebrae. The principle of surgical treatment is to remove the deformed disc. The rehabilitation period after surgery is approximately six months. Rehabilitation includes exercise therapy, physiotherapy, and taking vitamins.

Prevention of osteochondrosis of the spine consists in combating risk factors - keeping an active lifestyle, playing sports, proper nutrition, using corsets and special belts when loading the back, sleeping on orthopedic mattresses and pillows, avoiding hypothermia and injuries.